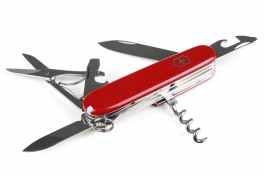 I have a Swiss Army pocketknife so, um, I have to ask: what is it that the members of the Swiss Army actually do?

Apparently, the Swiss Army knife was invented for the army more than a century ago to help soldiers assemble their rifles. I read on the web that the Swiss Army today is a fine, fine organisation which still gives each new recruit his or her own Swiss Army Pocketknife. How nice of them.

You can get a range of features on them nowadays so there’s no telling what kind of attachments the soldiers get. Rocket-launchers? Two-way radios? Patriot Missiles? Er, corkscrews, just like mine?

“OK, troops,” I imagine a gruff sergeant barking. “Corkscrews oooooooooout. I need a volunteer to open this bottle of fine, fine wine for the general.”

Until I found the corkscrew on my knife I suspected it was a fake. Only one of two brands are able to be called Swiss Army knives without infringing on copyrights. Mine is red and has the distinctive red cross like authentic Wengers or Victorinoxes but it looks tacky and the blades are blunt and wonky. I have no idea where I got it from. I thought maybe it came from the Salvation Army, and not the Swiss Army, but then I found the corkscrew attachment and ruled that out.

Maybe it was passed down to me as a family heirloom, but I cannot think from whom. There are not too many former Swiss soldiers in my family.

I found the knife in the garage when I moved house recently and I put it in my pocket, knowing it would be handy for cutting the tape on removal boxes.

But I forgot it was there when I took my wife to the local airport and tried to clear the security device at the gate.

Hmm, silly me. Naturally, they would not let me through. It would not have mattered if I had been a Swiss soldier on an down-under yodelling tour, Swiss Army pocketknives, even ones with wonky corkscrews which have never been used in the heat of battle, are taboo at airports.

I have absolutely no idea how they get past NASA security though.

Apparently, they are regular visitors into space because they are so useful up there.

The knife has also been successfully proven on expeditions: in the arctic ice of the North Pole; on the highest peak on earth, Mount Everest; and in the tropical rain forests of the Amazon. Time and again, it has been a life saver in situations of extreme danger and great need. Remember the MacGyver series which ran on TV from September 1985 to May 1992.

MacGyver used his Swiss Army knife in a number of ways, including picking locks, dropping a net on someone, hot wiring an elevator, disarming a bomb, starting a plane and, my favourite, using the corkscrew to pull himself out of a pit.

The first Swiss Army pocket knife was fairly simple. It had a screwdriver, reamer and can opener.

But they just keep getting better and better.

Another I found has an Allen key, chain tool and a “detachable multipurpose tool” that does triple-plus duties as spoke wrench, hex wrench and Allen handle and slip-joint plyers. 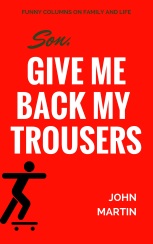 THIS STORY COMES FROM THIS BOOK. BUY THE eBOOK 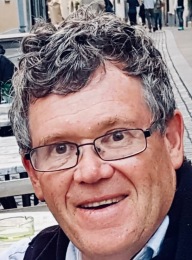